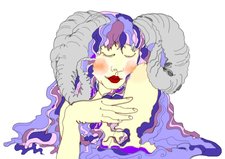 Some Herstory...
Growing up I was a very creative child. I loved to make things, to sew, draw and paint. And as I grew, this creativity became a life focus. However, in my experience its 'just doing it' that provides the talent that folks like to say is exclusive to only a few.

After three years of college I left to open my own studio in the Northwest. I began sculpting and showing in Olympia, Washington for many years eventually forming my business, Terroso Studio. Through this production gardenware company I began selling at local stores, farmers market and wholesale around Oregon and Washington. After ten years of heavy production work I was burned out from the repitition so I began to invent new kinds of fixtures and lamps. After 8 months of inovation and design,  I opened Luminosity Lamp Shoppe and sold terracotta light fixtures and lamps in brilliant color.
Now years later I have downsized, moved to the country and work mostly in porcelain. Learning to china paint has been a grand recent adventure. I love the smooth texture and layered color, the tradition and history of this difficult artform.  This year I finish a new art studio and begin a new series of painted sculpted figures.

You can find my work at:
Splash Gallery in Olympia,Wa
Ghost Gallery in Seattle.
​