THE DARK FOREST
In the middle of our walk of life, I found myself within a forest dark, for the straightforward pathway had been lost.
Dante, The Divine Comedy 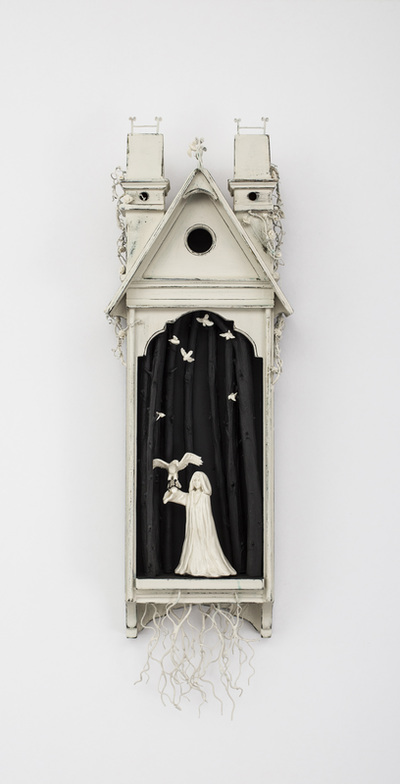 While I was working on these pieces, I was intuitively drawn to the concept of Ivory Towers. When defined by wikipedia, ivory towers represent purity, nobility, and occasionally symbolize Mary Magdelene.  But my favorite description is this….
'An ivory tower designates an environment of intellectual pursuit disconnected from the concerns of every day life'.

I like to think the roots and vines weave in and out of the manmade towers creating connections between reality and fantasy.  Inspired by the neurons in our brains and the veins in our bodies, I used their imagery to make the natural elements of the plant parts.

The characters in these fairy tales are purposeful and suggest symbolic connections between the unseen and seen worlds.  Mixed and matched in odd combinations not typically found in classic fairytales; bigfoot hangs with a maiden suggesting propagation, and books are hidden in the forest by White owls as if to explain our lack of books, our obsession with kindle and digital information.  My love of mysticism plays its part in assembling the various elements of each of the scenes. I believe we love mysticism and fantasy so much because we have one foot in reality and one foot out. Even scientists in their discovery and progression of society-in the form of technological advances- use theory and abstracts on a daily basis. Like a key to our unconscious the abstract unknown opens doors to reality on a cellular and molecular level.

‘'   Since ancient times the near impenetrable forest in which we get lost has symbolized the dark, hidden, near-impenetrable world of our unconscious. If we have lost the framework which gave structure to our past life and must now find our way to become ourselves, and have entered this wilderness with an as yet undeveloped personality, when we succeed in finding our way out we shall emerge with a much more highly developed humanity.’
The Uses of Enchantment: The Meaning And Importance of Fairy Tales,

In An Illustrated Encyclopedia Of Traditional Symbols, JC Cooper writes   ‘Entering the Dark Forest or the Enchanted Forest is a threshold symbol: the soul entering the perils of the unknown; the realm of death; the secrets of nature, or the spiritual world which man must penetrate to find the meaning.’

In many cultures, the forest is dedicated to god or ancestor worship. A place where offerings are made and initiation rituals to test the psychic realm undertaken.

The Dark Forest sculptures are crafted from wood, braised copper, scotch broom and porcelain.  The solid wood structures were inspired by the castles, monasteries and cathedrals of Europe- their majestic presence and gorgeous architecture.  Each piece was very detailed, taking up to 50 hours a piece to create and made over a period of 3 months. The handmade boxes were painted with over 7 layers of different kinds of paint that interact with each other in interesting ways, changing color over time and humidity.  I used a local invasive species-scotch broom- for the tree shapes.

Though the structures are drawn out an planned, the components were often made separate in an experimentation. Like picking colors off a palette or selecting components of an appetizer plate  to mix together. Each piece has dozens of copper pieces soldered together placed with abandon and intuitive spontaneous action. The final addition of birds, books, maidens and babies was an assemblage act of just pure whimsy. It was a pleasure to make and a sweet pain to see them go....